SFC (Smart Fundraising Campaign) is an advanced alternative to ICO, IEO, and other fundraising options for crypto projects.  Here how SFC looks like for a project:

In the meantime at IEO or ICO investors fund the whole roadmap of the project at once, and in case the project fails on one of the stages, there is no way for an investor to return funds, and all the funds will be lost in the majority of cases. As a result, when it comes to SFC investors gain a broader control over his/her investments and has an opportunity to fund projects only with MVP.

How to Participate in SFC on Emirex? 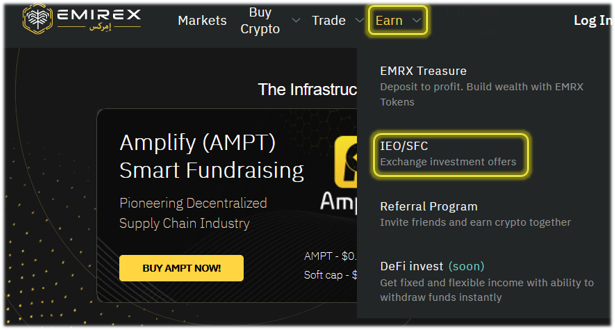 Choose “SFC” button on the top of the page.

You will be redirected to the page with SFC projects that are ongoing/were completed on Emirex.

Choose an ongoing project you want to invest in, and you will be redirected to its page with a description of the project, round goals, and a form to purchase tokens.

Here specify the number of tokens to purchase and press the “BUY” button to complete an order.